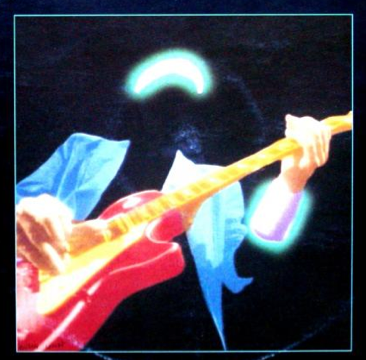 Inspired by Daniel Levinson’s “The Seasons of a Man’s Life”, I am working on a framework for male development with a complementing psychometric test I call “Suffering Sultans of Swing”. The beauty of the test is that the only material needed is headphones and access to the song “Sultans of Swing” by Dire Straits.

Before you read the rest of this post, take some minutes and test yourself by listening to the song here:

So all men out there…

Did you listen to the whole song?

Or did you turn it off before the end?

In any case, if you would tell me a) your age and b) at exactly what point you turned off the song, my “Suffering Sultans of Swing” test would reveal a lot to me about your life and its future.

The purpose of this research was to find out whether there is a correlation between a man’s happiness and his like of Dire Straits’ song “Sultans of Swing”.

In a study based on individual listening sessions in a state-of-the-art music studio in Frankfurt am Main (with a vintage German amplification system), I surveyed 300.000 men. These men, flown in from all over the world, had various cultural backgrounds and income levels, and were aged from three to 93. 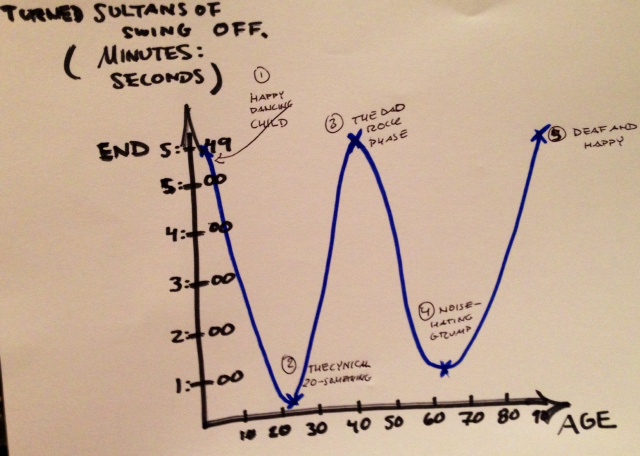 The study clearly shows a correlation between male contentment and how long they managed to listen to Sultans of Swing without turning it off. I identified five phases or stages, which are clearly defined as seen in the graph below. The interesting observation is that the length a man can listen to the song changes dramatically depending on age. From the extreme 20-something who couldn’t bear the song for more than a couple of seconds, to the child, dad and deaf male, who listened to the whole song without reaching for the off-button.

Here are some comments from participants in each group, which nicely illustrates each stage.

3. DAD ROCK PHASE (Peak at 43 years)
“Genuinely one of my favourite songs..Mark is an absolute king when it comes to licks and riffs, and this song is just the epitome of coolness. The fact that he also did a version of this with Eric Clapton just blows my mind too, since they’re two of my absolute inspirations for playing/learning guitar..”

“The spirit of generosity already threatened by the horse, evaporated entirely with the motor car.”

– Bruce Chatwin in his Patagonia notebook

I’ve had an issue with cars for a long time now. I don’t remember disliking them as a kid or teenager, so I can’t see any hidden psychological traumas that I have oppressed. In my 20s, I thought cars were great for getting to the French or Austrian Alps to snowboard. My friends and I always had some old rubbish car for that reason. But I don’t remember ever liking cars. They were more of a tool for getting far away from boring university studies.

I have owned cars a few times, but have always had problems with them. One lost the exhaust pipe in the Moroccan desert, one caught on fire on a French Autoroute, and one was stolen in East London. And I’ve always disliked buying and selling cars. Cars are very expensive to most people and the large sums of money, which change hands in these transactions create mistrust between all parts that are involved.

But these days my issue with cars is not with my own car or other peoples’ cars. It’s with cars in general. The car.

I think we can now declare the car an obsolete model which needs to be replaced. Why? Well, let’s look at a couple of things.

And so on… We all know these things. A cost-benefit analysis would perhaps be more favorable to cars in remote areas, but in urban areas there is no reason for cars.

A recent report I read said that human drivers will disappear within a generation. I was a bit disappointed. I had hoped that they will disappear before that. But most people agree that self-driving cars will transform our lives when they come.

I’m curious to see whether self-driving vehicles will solve my problems and still give me the benefits with cars, mentioned in the cost/benefit analysis above.

Let’s list everything  again and see if the self-driving car will change life for the better:

I wonder what will disrupt the car in the same way as the car disrupted the horse. I suggest the human.

This blog post is part of a series, which started with some of my issues.. I call this the irresponsibility series, as my inner conservative tells me that the posts and thoughts here are “utterly, completely irresponsible”. In the series, I discuss obsolete and new models for five things which I have issues with: Democracy, Hard Work, Cars, Heroic (or Dickhead) Entrepreneurship and Settling. This series is based on Buckminster Fuller’s excellent quote, which has inspired many of us;

“You never change things by fighting the existing reality.
To change something, build a new model that makes the existing model obsolete.”