Over the Christmas / New Year break I decided to do an experiment. Instead of aimlessly throwing out things that interested and excited me online (retweet them, post them on to my Facebook wall etc), I decided to save them for after the holiday.

Instead I wanted to try an experiment where I tried to find logic in the combination of this  information, of these thoughts and feelings. Thoughts from others which generated thoughts from me. Generated feelings and intuitions from me. To find patterns and make sense of these social media fragments. To weave them together.

After the break I had collected 15 “scan hits”.

1. An article about how “A New Working Constitution Emerges to Codify a “Liquid Holacracy” Governance Model”. Apparently “Bitnation in partnership with Swarm is developing a proto-constitution, or what it referred to as a holonic contract to govern interactions within its “Slack Community”, which is  a collaborative messaging and sharing platform used globally by organizations for a better workflow, while emphasizing the autonomy of its various holons and individual contributors.”

2. A new book called Platform Scale: How an emerging business model helps startups build large empires with minimum investment.
You’ve heard of it: “Over the last decade or so, we’re seeing the emergence of a new form of scale. Today’s massively scaling startups – which rapidly grow to millions of users and billions in valuation – do not sell a product or service. Instead, they build a platform on which others can create and exchange value.”

3. A public policy paper put together by Stacco Troncoso from one of my favourite organisations, The P2P Foundation. Proposal for Public Policy Paper: “From Smart Cities to Smart Citizens: City as a Commons”. A policy advocacy paper to explore and promote the vision for a ‘city as commons. The paper will bring together specialists and advocates in a range of area, including: tax policy, co-working, co-ops, food production/consumption, peri-urbanism, sharing, political space, place-making, cultural diversity, de-gentrification, anticipatory governance, social enterprise and making / industry (to name a few). Overall about 20 authors can be accepted in this first round.

4. A tweet conversation with Nadia El-Imam, co-Founder and CEO of Edgeryders, a online community and distributed think-tank of citizen experts from across the globe. It was spurred by a quote in one of her recent blog posts: “Make relevant art“. This quote felt very important to me.

5. An article on Salon.com about the rise of the techno-Libertarians: The 5 most socially destructive aspects of Silicon Valley. It argues that the tech industry is morally and ethically bankrupt, and it’s starting to take its toll on ordinary Americans.

6. An old article in The Age, where former US president Jimmy Carter tells how he is losing his religion for equality.

7. A blog post by one of today’s most interesting thinkers and doers Vinay Gupta: Tell Me Who You Are. Identity, institutional memory, and the persistent illusion of the self.

8. Another p2p foundation blog post about living amongst the ruins after capitalism. 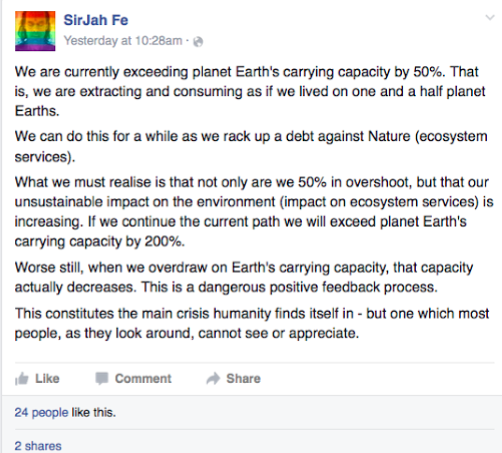 11. A quote in a TV interview with the master of weird and wonderful cultural production David Lynch. He described his creative process and ideation with a fishing metaphor. Apparently he uses that often, as I found it again online:

“Ideas are like fish. If you want to catch little fish, you can stay in the shallow water. But if you want to catch the big fish, you’ve got to go deeper. Down deep, the fish are more powerful and more pure.They’re huge and abstract. And they’re very beautiful.”

12. An article about eight New Types of Digital Fabrication Machines from 2015.

13. Another NY times article – How to Cultivate the Art of Serendipity.  This one written by Pagan Kennedy, author of the forthcoming book “Inventology: How We Dream Up Things That Change The World.” I wrote about serendipity a couple of years ago. A concept which is very popular and overused in management blogs at the moment. But I think it’s hugely important and needs to be considered and further explored.

14. A third text from the p2p Foundation by founder Michel Bauwens (actually excerpted from Matthew Heskin): Cooperation is better for innovation, than competition.

15. A tweet from @macroscope_ about how systems thinking can help you become a better person.

So after putting these themes down on a paper I started to think. I saw a couple of connections and clusters, but nothing interesting. I looked at them with my explorer glasses. Which of these 15 themes would I like to explore further? I ended up with serendipity, ideas as fishing, identity & the self and relevant art.

The next day I looked at my paper again. This time I tried to divide them into three categories: problem, dichotomy and solution. This was interesting and I saw some similarities between the solutions and those I wanted to explore more. Perhaps I am drawn to solutions rather than problems at the moment?

Finally I used Wilber’s four quadrant model, which I find very helpful to check that I’ve taken a broad perspective on something. I placed the remaining five themes in it as per the figure.

All these quadrants are linked and the themes in one of them will impact on all others. For example an  internal idea in my head (coming from my identity and Self) will lead to external output (art). Serendipitous encounters will rearrange my view of systems. My creations (which can be seen as art) will serendipitously lead me to new people, which will lead me to new ideas and a new identity.

Well, this experiment didn’t really turn out as expected. The sense-making became more of a personal guide for my future thoughts and actions. But that’s not bad I guess.